Conversation-Driven Development means making incremental updates to your assistant, fixing problems as you find them in real conversations. Some problems can be fixed directly in Rasa X, while others that are more disruptive or require action code changes should be fixed outside of Rasa X. In both cases, changes should be integrated into your deployed assistant automatically through CI/CD.

The best way to find problems and successes in conversations is to review and tag them regularly, and then use the tags to filter conversations for those that require attention.

For example, you might have an NLU problem tag, general successful and unsuccessful tags, or a possible new skill tag for conversations where users ask for something you haven’t built into the assistant yet. You’ll find out which tags are most useful for you as you go along, or you might find you need to add new tags to better identify problems and successes later.

Filtering by Other Indicators#

Filtering by manually added tags is an accurate way to identify successes and failures, but you can also use other (less labor intensive) indicators to find conversations which are likely to be (un)successful.

You might find that other filters specific to your assistant are good indicators for success or failure; however, any indicators of this kind will be imperfect, so it’s important not to rely solely on one set filter to identify problems.

Once you’ve identified a problem in your assistant, you need to decide what kind of fix will take care of the problem. Sometimes fixing a problem means annotating NLU data or adding a few stories in Rasa X, and sometimes it means changing your action server code or making a more disruptive change, like merging two intents, outside of Rasa X.

The simplest kind of problem you’ll find is an NLU intent prediction that was either wrong or made with low confidence, or an incorrect or missing entity prediction. In this case, the fix is simply to annotate the message with the correct intent and/or entity in Rasa X and save it to your training data.

From there, you can push your changes to your remote Git repository via the Integrated Version Control feature and run automated tests before redeploying an updated model.

For problems involving a simple action misprediction, a straightforward fix is to correct the story in Interactive Learning, and add the corrected story to your to your training data. To correct a story, select the last successful prediction in the conversation, then click Copy to interactive learning in the right hand annotation pane. 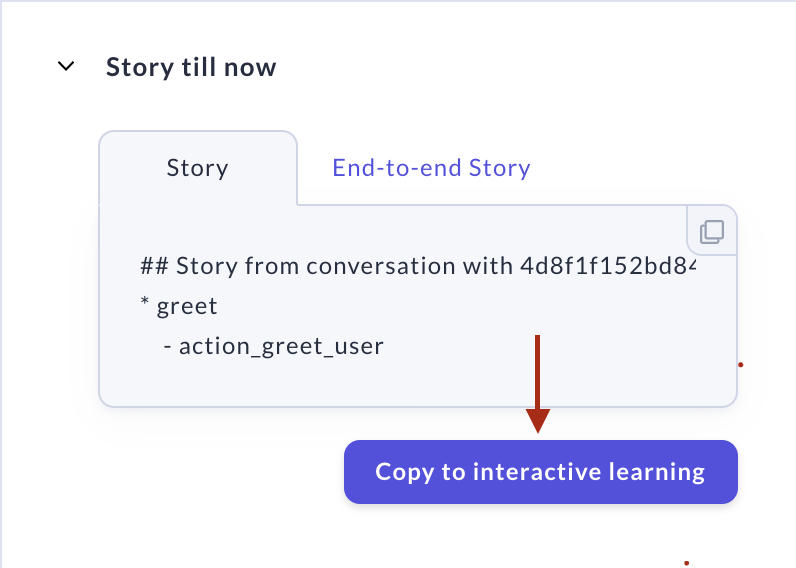 This will take you directly to the Interactive Learning screen with “strict mode” enabled, so that you can correct every prediction the assistant makes. You can also correct preceding conversation turns by hovering over any user or bot message and selecting Correct this. Once corrected, you can save the corrected story and/or save the test story as a test conversation.

Having a large and representative set of test stories is the best way to ensure any updates you make to solve one problem don’t inadvertently cause new problems. Successful conversations or conversations you correct in Interactive Learning can be saved directly as test stories and used to test your model as part of your CI/CD pipeline.

To save a conversation as a test, select Test story and Save test story on the right hand side bar. If you’re saving directly from the conversations screen, select the last message you want to include in the test story before saving it. 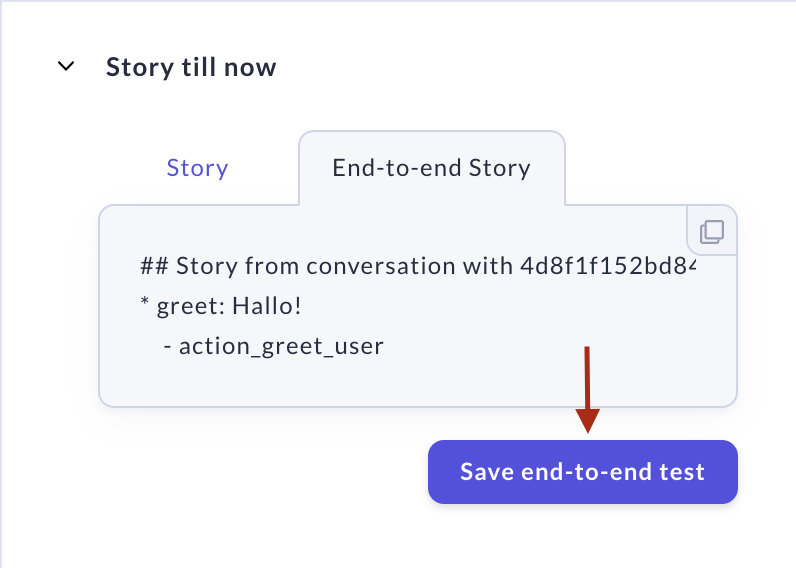 In the case that the problem is an ambiguous or unhelpful bot response, you can update the response text in Rasa X by going to the Responses screen. If a response is being sent directly by a custom action, you’ll need to update your custom action code outside of Rasa X to fix the problem.

Making Changes Outside of Rasa X#

Sometimes, a fix for a problem you identify in a conversation will be more disruptive than just adding a story or NLU annotation. As a rule of thumb, if a fix requires systematically updating all stories containing a certain action or intent, it’ll probably be easiest to do in a code editor outside of Rasa X.

For example, if you notice that two intents are frequently confused and have very similar training data, you may want to merge the two intents and change your stories to diverge based on entities instead of intents. In this case, it is easiest to make the changes outside of Rasa X and run some manual tests before merging the changes in via CI/CD.

Other disruptive fixes include:

After you make these changes, you will want to push your updates to the Git repo connected to your Rasa X instance, and let a continuous integration (CI) server ensure that everything works as expected. Once merged, your fixes will be available in Rasa X as well.

Some problems will require changes to your action server. You might notice, for example, that actions are mispredicted because a slot that should have been set by a preceding custom action aren’t present in a conversation. Or, you might see that the actions are predicted correctly, but they don’t seem to be doing the right thing or returning the right response to the user. In these cases, you need to update your action server.

Steps To Update Your Action Server#

Steps 3-5 can be automated via CI/CD.

Changes to your NLU data, stories, responses, domain and config can be incorporated into your Rasa X instance via Integrated Version Control. These include changes made inside and outside of Rasa X.

Integrating Rasa X with Git via Integrated Version Control enables your team to use the full power of the Git ecosystem:

When you make a change to your assistant in Rasa X, the side bar state will transition to an orange state. This means that you have changes that can be pushed to the remote repository when you are ready. During this time, Rasa X won’t fetch new changes from the remote repository to avoid overwriting your changes.

When you are finished making changes and are ready to add them to your Git server, you can commit and push them by clicking on the Git icon in the sidebar. If your remote branch has not changed while you were annotating, you can choose between

When you are ready, click on the side bar icon and follow its instructions. Once your changes are pushed, Rasa X will return to being in sync with your remote branch and will pull in the latest changes from your remote as they become available.

If you pushed your changes to a new branch, these changes won’t be reflected in Rasa X until you have merged them into the target branch.

You can of course also discard your changes. Rasa X will then be reset to the latest state of your remote branch.

Setting up a CI/CD pipeline in addition to Integrated Version Control enables you to automate:

If you haven’t set up a CI/CD pipeline yet, your first action server change is a good time to do so. It’s easy to lose track of which updates on your branch have actually been deployed to your running action server, since it isn’t updated via Integrated Version Control.

By including unit tests for your action code in your CI/CD pipeline, you can be sure that changes to your action server are always tested before being deployed.