Rasa Enterprise allows multiple versions of an assistant to be run simultaneously and served to different users. By default, two environments are defined:

This page provides a walkthrough of the best practices for managing the lifecycle of a Rasa model. 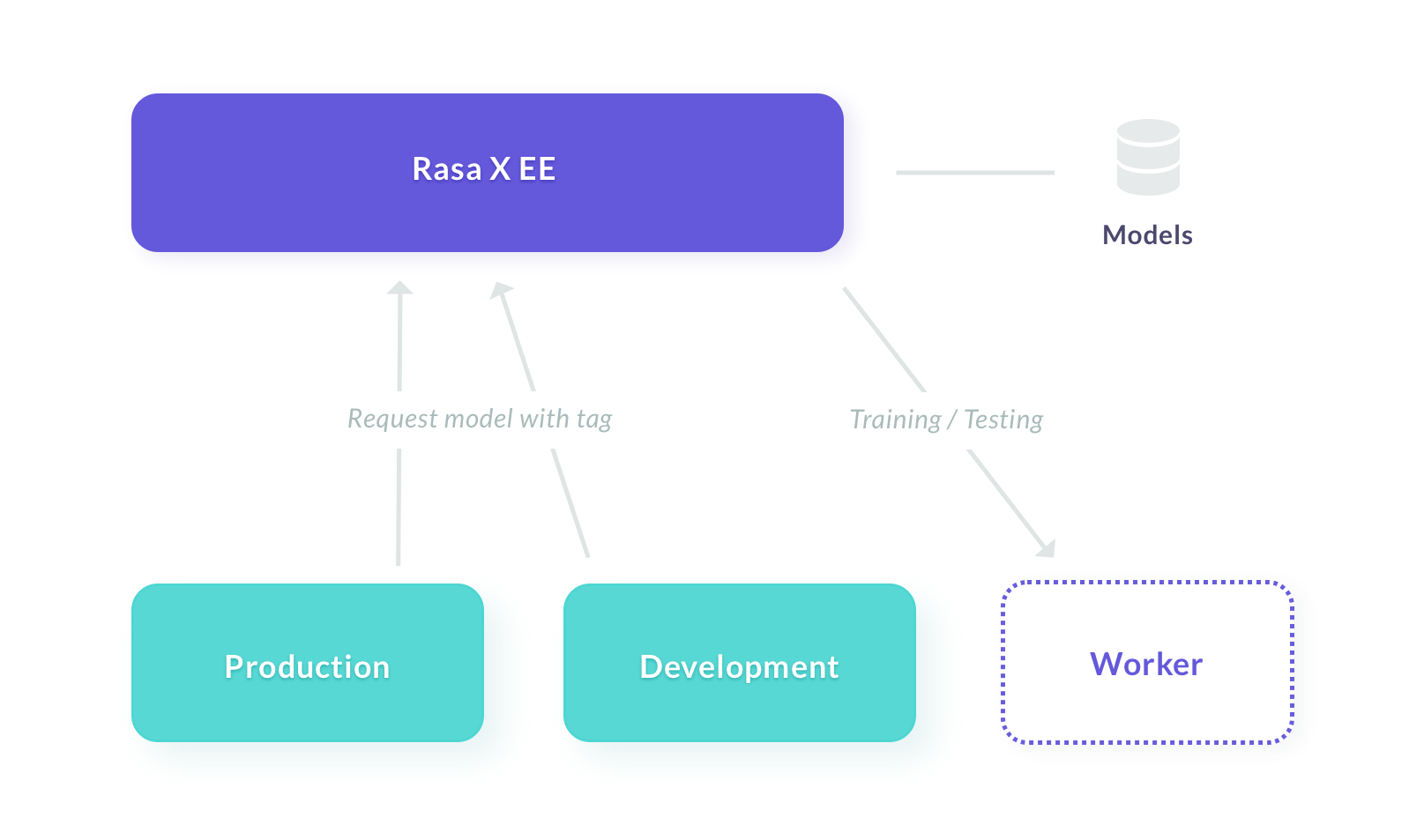 Each environment corresponds to a Rasa server which uses the model with the corresponding tag (e.g. production). The model training happens on the worker instances to ensure the training does not degrade performance.

A model can be given multiple environment tags, but each environment can only have a single model associated with it. If model A is tagged experimental and you promote it to production, the model will now have two tags, and the two environments will use the same model. This ensures that you can promote a model to an environment without affecting any others.

The name and number of environments can be customized when deploying Rasa Enterprise.

In a typical web application, the experimental, and production environments are often isolated from each other (e.g. running on separate machines). In a machine-learning application, you want to seamlessly collect training data from your production users, integrate it into the development models, and promote those models into production to get a continuously improving system. For this reason, we recommend running all of the environments on the same cluster.

This workflow assumes, you already added an additional deployment environment. If you are only running the production and no experimental environment, you can follow the guide in the next section which explains how to add a new environment. 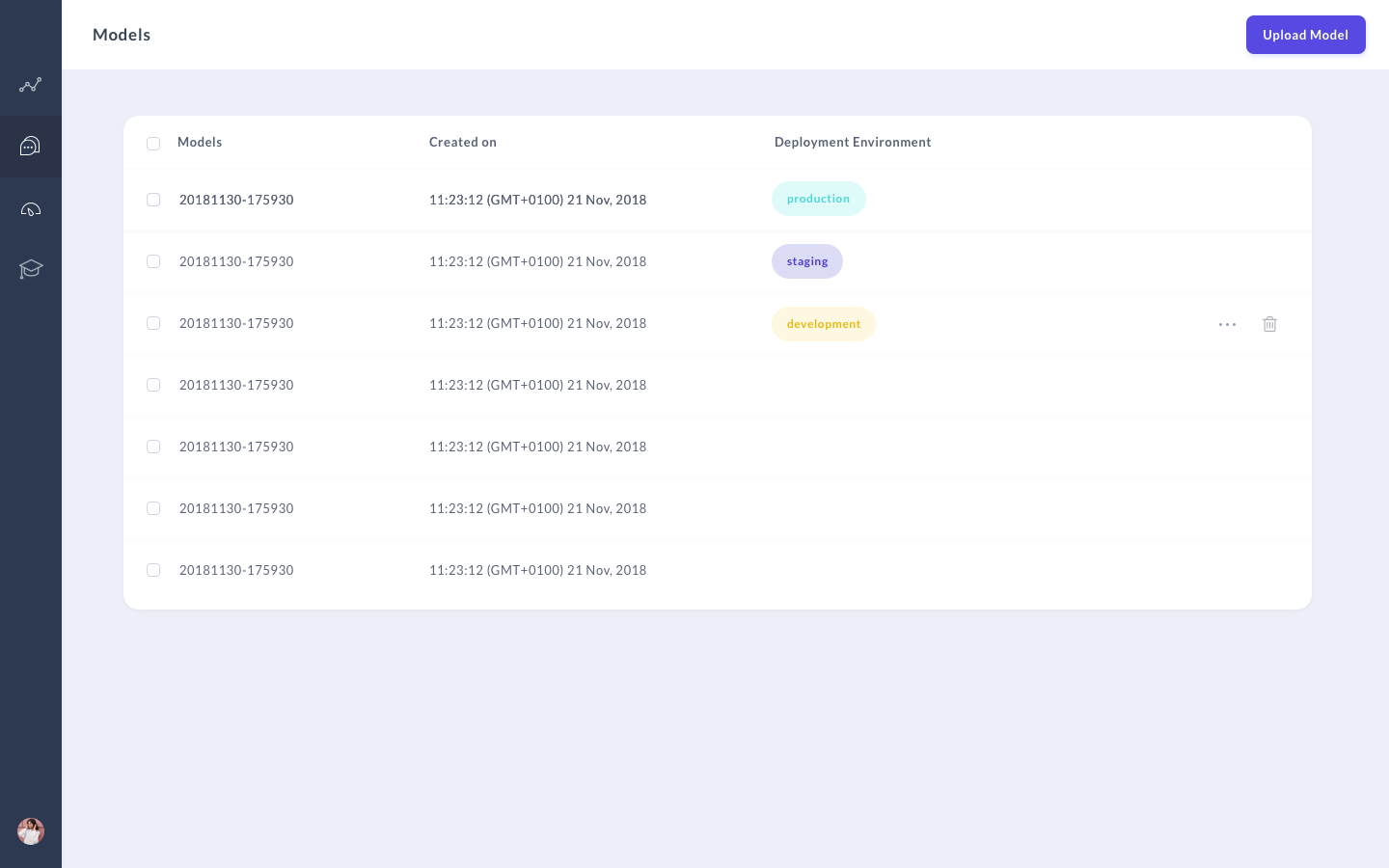 This model will now be used to serve users at the endpoint /conversations/{sender_id}/messages?environment=experimental.

To promote a model to experimental you need to have the environments.experimental.write permission. Check with your admin if you do not have sufficient permissions.

By default, only the admin role has the permission to modify the production environment. You can customize this in Role-Based Access Control

Rasa Enterprise lets you run multiple Rasa models in parallel, allowing you to test different environments promoting them to production. In this section we’ll show you how to

By default, Rasa Enterprise runs two Rasa servers: one that should be used in production and one worker that executes certain tasks like training models. Let’s look at an example where we add a fourth Rasa server in addition to the predefined rasa-production and rasa-worker servers. Let’s call it rasa-experimental. Create a file called docker-compose.override.yml in /etc/rasa containing the following:

Right below, make an entry for the new Rasa service rasa-experimental:

It’s important that the RASA_ENVIRONMENT variable is unique, and that RASA_MODEL_SERVER requests a unique tag, in this case experimental.

We need to let Rasa Enterprise know about the newly defined Rasa servers, so that you can talk to the models running on it in the /conversations view. Following the example of our rasa-experimental service, add an entry to your environments settings in the environments.yml file:

The hostname part of url has to match the service name defined in docker-compose.override.yml (in this case rasa-experimental).

By default, all Rasa servers share the same token, but you are free to define a separate token for each service. To achieve this, replace ${RASA_TOKEN} above with your <TOKEN>, and add an entry in the environments section of the new service in docker-compose.override.yml: RASA_TOKEN: "<TOKEN>".

The final step is to upload a Rasa model and assign the right tag. You can upload models and tag them via the HTTP API. If you have uploaded a model via the API, you can also tag it in the interface.